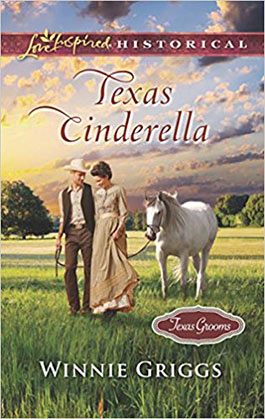 In Search of a Groom

After a life of drudgery on her family's farm, Cassie Lynn Vickers relishes her freedom working in town as a paid companion for feisty Mrs. Flanagan. When her father suddenly demands she come home, she has no choice. Unless she can find a husband. If only she could convince handsome town newcomer Riley Walker to marry her…

Riley is on the run. He's desperate to keep his niece and nephew safe from his crooked half brother. But a delay in Turnabout, Texas, shows him everything he didn't know he was missing: home, family-and Cassie Lynn. Can he find a way to become her Prince Charming…and build a real family with the children and Cassie Lynn?

Making up her mind, she decided to share her plan. "I do have an idea about how I might get around this."

Mrs. Flanagan straightened. "Well, bless my soul, you do have some gumption, after all." She leaned back with a satisfied nod. "Let's hear it."

Cassie Lynn took a deep breath. "It appears the only excuse my father will accept is if I was spoken for. So that's what I intend to do-find a man to marry."

The widow's brow went up. "Just like that, you're going to go out and find yourself a suitor?"

"I didn't say it would be easy." Cassie Lynn tried to keep the defensiveness from her tone. "And it's not as if I expect anything romantic." She didn't have any notions of finding a fairy-tale prince who would look at her, fall instantly in love and whisk her away.

But Mrs. Flanagan was frowning at her. "You're much too young to be giving up on love. Don't you want at least a touch of romance in your life?"

"Romance is no guarantee of happiness. And even if that was something I wanted, in this case there's no time for such schoolgirl notions. So a more practical approach is called for."

"I see." Mrs. Flanagan crossed her arms, clearly not in agreement with Cassie Lynn's argument, but willing to move on. "Is there a particular bachelor you've set your sights on?"

"I've been pondering on that and I have a couple of ideas. The main thing, though, is I've decided what requirements the gents need to meet." She'd given that a lot of thought on her walk home.

"Well, for one, since I want to continue pursuing my goal of opening a bakery, the candidate will need to be okay with having a wife who does more than just keep his house. And it would also require that he live here in town so I can be close to my customers, for delivery purposes."

"Surely you also want to consider his character."

"Of course. He should be honest, kind and God-fearing." She didn't expect affection?after all, this would be a businesslike arrangement?but she did hope for mutual respect.

Cassie Lynn shrugged. "That's of less importance. Though naturally, I wouldn't mind if he's pleasant to look at." Like Mr. Walker, for example.

She shook off that thought and returned to the discussion at hand. "But none of that matters unless I can find someone who's also open to my proposal."

"And you've thought of someone who meets this list of qualifications?"

"Two. But I don't really know the men here very well, so I was hoping that perhaps you could give me some suggestions."

"Humph! I've always thought of matchmakers as busybodies, so I never aspired to become one."

"Oh, I don't want a matchmaker-I intend to make up my own mind on who I marry. I'd just like to have the benefit of advice from someone who knows the townsfolk better than I do. And who has experienced what a marriage involves."

"Well then, much as I'm not sure I approve of this plan of yours, I don't suppose I can just let you go through it without guidance of some sort."

"Thank you so much. I can't tell you what a relief that is."

"Now don't go getting all emotional on me. I said I'd help and I will. Tell me who these two gents are that you're considering."

"The first name that occurred to me was Morris Hilburn."

Cassie Lynn nodded. "From what I can tell, he meets most of my criteria. Of course, I won't know how he feels about having a wife who runs a bakery until I talk to him."

"Morris Hilburn is a God-fearing man with a good heart, all right. But he is not the smartest of men and he's not much of a talker."

"Book learning and good conversation are not requirements."

"Think about that before you rule them out. Do you really want to spend the rest of your life with a man whose idea of conversation is single syllable responses?"

Cassie Lynn paused. Then she remembered the fate her father had in mind for her. "There are worse things." She moved on before her employer could comment. "The other gentleman I thought of was Mr. Gilbert Drummond."

"The undertaker? Well, I suppose he might be someone to look at. Then again, he strikes me as being a bit finicky."

"There are worse qualities one could find in a man. Besides, a woman in my position doesn't have the luxury of being choosy." More's the pity. "But I'm open to other suggestions if you have any."

"I'll need to ponder on this awhile."

"Unfortunately, my time is short." She hesitated a heartbeat, then spoke up again, keeping her voice oh-so-casual. "There's actually a third candidate I'm considering."

"I met a newcomer to town while I was at the livery. He just arrived on today's train."

"A newcomer? And you're just now telling me about this? You know good and well part of the reason I hired you is to have someone to bring me the latest bits of news."

Cassie Lynn laughed. "And here I thought it was for my cooking."

"Don't be impertinent. I want to hear everything. How did you meet him? Is he a young man or more mature? Is he handsome? Is he traveling alone." She waved impatiently. "Come on, girl, answer me."

She decided to respond to the last question first. "He's traveling with two children, a niece and nephew. I met the little boy first. Noah is about seven and such an endearing child-intelligent, curious, outgoing. The little girl, Pru, seems shy and quiet." Cassie Lynn searched her memory for all the little descriptive details, relating these tidbits as vividly as she could, knowing Mrs. Flanagan loved getting these glimpses of the outside world she was missing.

After a few minutes of that, however, her employer interrupted her. "Enough of the kids," she said with a grumpy frown. "Tell me about the uncle."

Cassie Lynn paused a moment to pull up Mr. Walker's image in her mind. "He has hair the color of coffee with a dash of cream stirred in, and his eyes are a piercing green." A glorious shamrock-green that she could still picture quite vividly. "He's lean but muscular, if you know what I mean, like he's used to doing hard work."

Mrs. Flanagan made a disapproving noise. "Don't be coy with me, Cassie Lynn. Take a guess."

She hid her grin. "I suppose I'd put him around twenty-four or twenty-five." Though there was something about the look in his eyes that spoke of experience beyond his years.

"How did you come to meet him?"

Cassie Lynn explained the circumstances as she crossed the room to retrieve an apron that hung on a peg near the stove.

"So what was it about him that made you decide after only ten minutes in his company that he might be the husband you're looking for?"

"I only said he might be worth considering." Then, under Mrs. Flanagan's steady gaze, she shrugged. "I suppose it was the fact that he had two young children in his care-it made me think he might be a man in need of a woman's help. And it was also the way he interacted with them. He obviously cares about them."

"I agree with you there," Mrs. Flanagan said. "A single man in charge of two young'uns sounds like a gentleman in need of a wife if there ever was one."