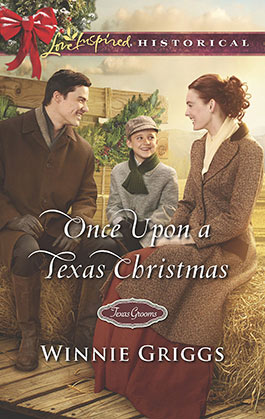 Partners for the Holidays

Abigail Fulton is determined to find independence in Turnabout, Texas-and becoming manager of the local hotel could be the solution. But first, she must work with Seth Reynolds to renovate the property by Christmas-and convince him she's perfect for the job. If only he hadn't already promised the position to someone else…

Ever since his troubled childhood, Seth yearns to prove himself. And this hotel is his best chance. But what does someone like Abigail know about decor and furnishings? Yet the closer the holiday deadline gets, the more he appreciates her abilities and her kindness. His business ambitions require denying Abigail's dearest wish, but can they put old dreams aside for a greater gift-love and family?

Grabbing hold of his valise, Seth made his way to the exit. As he carefully stepped onto the platform, he gazed around, assessing his surroundings. The depot was a mid-sized painted structure fronted by a wooden platform with three benches lined up against the building. A freight wagon was pulling to a stop at the end of the platform, no doubt ready to take on some cargo the train had brought with it.

There were people on the platform but it wasn't particularly crowded-nothing like the bustling throngs he'd waded through when he departed the Philadelphia station.

One person in particular caught his attention for just a moment. A young woman wearing a bright blue dress and with an interesting shade of dark red hair. But that wasn't what held his attention-it was the bright hopeful expression she wore. It was the expression of pent up excitement, as if she was meeting someone important to her, someone she couldn't wait to see. A family member perhaps? Or a sweetheart?

He felt a momentary twinge of jealousy. What would it be like to have someone waiting for him with such happy anticipation?

Then he shrugged off that fanciful thought and moved toward the depot. The first order of business was to acquire directions to the hotel. He'd just step inside and ask-

"Excuse me sir, are you by any chance Mr. Seth Reynolds?"

Startled, Seth turned to see the young red-headed woman staring hopefully at a balding gentleman who'd just stepped off the train. She'd been looking for him?

The man she'd approached gave her a startled look which quickly turned into a sort of gruff dismissal. "I'm sorry young lady, but that's not my name." With a stiffly-executed tip of his hat, he walked away.

The woman gave a chagrinned sigh and turned back to the train.

Why was she looking for him? She appeared too young to be Judge Madison's granddaughter, but no other explanation came to mind. How like the man to arrange to have someone meet him. It was both unexpected and unnecessary. But he couldn't just leave her standing there.

He steeled himself to ignore the pain in his leg and took a firm step in her direction. "Excuse me."

She turned and met his gaze. The impact of her curious, bright blue eyes startled him. A stray curl had escaped the confines of her pins and fallen over her forehead. For just a moment he had the absurd desire to tuck it back in for her.

Annoyed by the undisciplined direction his thoughts had taken yet again, Seth tugged sharply at one of his cuffs. "I couldn't help but overhear you just now. I'm Seth Reynolds."

"Oh." For a moment all the young lady did was stare.

Which gave him time to study her. Hair the color of mahogany and blue eyes that had a touch of green. Clothes that were well made but not the height of fashion. Not a beauty in the traditional sense, her mouth was a little too large, her forehead a bit too broad. But there was something about her...

When the silence drew out he gave a sardonic smile. "I take it I'm not what you were expecting." Was it the cane that had tied her tongue?

His words seemed to bring her back to herself as a touch of color rose in her cheeks. "My apologies. It's just that Judge Madison said you were a friend of his so I assumed you would be nearer his age. But that was silly of me. I'm sure Judge Madison has friends of all ages. Just look at me."

Not his employer's granddaughter then. "So you're a friend of Judge Madison's? Did he send you to meet me?"

She waved a hand and smiled as if he'd said something amusing. "In a manner of speaking, though he couldn't say exactly when you'd arrive. But I couldn't let a friend of the judge's show up with no one to welcome him. So I've been meeting trains ever since I got his letter."

Was the woman always this chatty?

Then she gave him another of those friendly smiles. "Actually he's hired me to help you with the renovations at the Rose Palace. You and I will be working together while you're here. Isn't that wonderful?" She delivered that bit of information as if she thought it would make him happy.