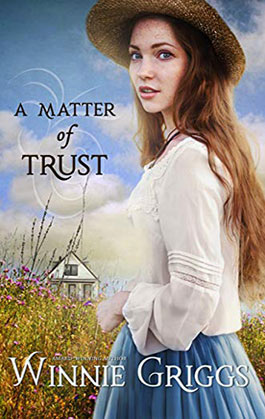 When Lucy Ames rescues a stranger from being beaten and robbed, she can't just leave the man to die. But with her reputation in town already in tatters, how can she take this wounded man into her home? All she can do is what's right…and hope for the best. Unlike Lucy, her young charge, Toby, is delighted to have a man in the house. As much as Lucy wants the man gone, she can't begrudge him the father figure he never knew.

On a self-assigned mission to locate his nephew, Reed Wilder can't believe his luck when he realizes his beautiful rescuer is the strumpet who beguiled his arrow-straight brother. But she's not at all what he expected. She's independent and feisty and…captivating.

Before either of them realize it, Lucy and Reed fall in love. But how can their relationship survive the secrets that plague them both?

"The preacher's cat is an elegant cat."

"The preacher's cat is a frightened cat."

"The preacher's cat is a gregarious cat."

"Gregarious." Toby drew the word out as he stretched the band on his slingshot. "What does that mean, Ma?"

Lucy Ames smiled down at the boy walking beside her. The Preacher's Cat was a favorite game of Toby's. He collected new words like other six year olds collected rocks and bugs.

"It means to be sociable, to want to be part of a group of other folk rather than off by yourself all the time." Lucy pointed to the floppy-eared dog capering along beside them. "For example, Jasper here is very gregarious, but Mustard, for all his skills as a mouser, isn't."

Lucy watched him mentally file away her definition. Her sweet, curious, intelligent little boy, so precious to her. Now that her mother was gone, he was all she had in her life that truly mattered.

Her smile faltered at that reminder, and she pressed a hand lightly against her bodice, comforted by the feel of her mother's locket, cool against her skin. Then she hitched her shoulder, shifting the weight of the basket she carried. It was a beautiful day, tranquil here in the dappled shade of the woods, and they had an afternoon of picnicking and berry picking ahead of them. Time to concentrate on her blessings, not her losses.

She stepped over a knobby root and paused while Toby and Jasper studied a large beetle lumbering up the side of a hickory tree. There was no need to hurry, no sense of urgency. After all, the walk was as much a part of the outing as the destination. They'd been strolling along this leaf-carpeted trail through the woods for about thirty minutes, and the creek crossing was just past the bit of heavy brush up ahead. Some of the choicest blackberries in the county grew there.

Once they'd picked enough for Lucy to make a cobbler or two, Toby's favorite treat, they'd eat the picnic lunch she'd packed. Afterwards, they could wiggle their toes in the creek, or look for cloud pictures, or-

A noisy commotion from somewhere up ahead caught her attention. At the same time, Toby reached for her hand. "Ma," he whispered. "What's that?"

"I'm not sure." Lucy gave his hand a comforting squeeze as she tried to interpret the sounds. Was that a horse's high-pitched whinny? The confusing sounds seemed to come from the clearing at the creek crossing, just beyond that bit of brush.

Putting a finger to her lips, Lucy reached into her skirt pocket, drawing courage from the feel of the pistol and two bullets hidden there. Ever since a rabid dog attacked the Conners boy in these woods a year ago, she'd made sure she could defend herself and Toby when they went out, even if they were only going berry picking.

She motioned for Toby to take hold of Jasper and stay put. After silently praying and loading the gun, she eased over to where she could see past the brush to what was causing all the fuss.

Merciful heavens! Roy and Vern Jefferson were beating the tar out of a man she'd never seen before.

She cringed at the viciousness of the no-holds-barred fight. Even though he was outnumbered, the fast moving stranger fought back with amazing agility. Then Vern picked up a fist-sized rock and hit the stranger on the head.

Lucy swallowed her cry of protest and scooted back to Toby.

This wasn't her fight. She had no idea what it was about. For all she knew, the stranger could be as rotten as the Jeffersons. And there was Toby to consider. If she got involved and it turned against her, she'd be putting him in danger, too. The smart thing would be to keep hidden until the Jeffersons left, and then do what she could to help their victim.

But heaven help that stranger. Those brutes enjoyed hurting others. They weren't likely to let up until he lay unconscious. Or worse.

She couldn't just sit here and do nothing. Surely, with her gun and a bit of bluster, she could run them off. They might be meaner than a sack of rattlers, but they were cowards who'd run at the first hint they'd lost the upper hand.

Dear Father, please give me the courage to do what is needed here.

"Keep a tight hold on Jasper and stay here," she whispered to Toby. "Stay very quiet, and don't dare show yourself until I tell you it's clear. No matter what. Do you understand?"

Looking at her with wide, frightened eyes, he nodded.

As Lucy moved away, her smile vanished. Inching forward, she took another peek into the clearing. The stranger lay on the ground, belly down and unmoving. Roy and Vern stood nearby, rifling through his saddlebags.

Now that changed matters considerably. Lucy slipped further back into the cover of the brush. She might intervene to save a life, but not property. No, she'd wait until they took whatever they wanted and left. Thank goodness she wouldn't have to-

Lucy stiffened as the stranger stirred and pushed himself up. She watched, open-mouthed, as he launched into Roy.

Some of Lucy's sympathy evaporated as she silently fumed at his recklessness. Why couldn't the fool just play possum until they rode off? Surely nothing in that saddlebag was worth dying for.

The injured stranger's bravado proved no match for the bullies. Vern grabbed him from behind, pinning his arms. Roy, with a vengeful smile, punched the stranger in the gut. Then he pulled his fist back for another blow.

She didn't dare wait longer. Offering up a silent prayer, and ignoring the nervous churning in her stomach, Lucy stepped into the open, pistol leveled.