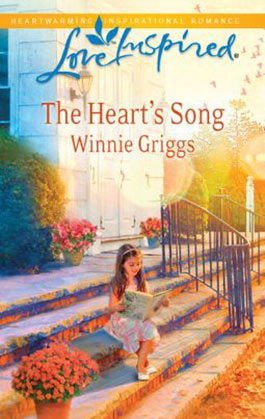 From handbells to wedding bells?

Widower Graham Lockwood hasn't stepped foot in a church since he lost his family. So he can't possibly say yes to his new neighbor's request that he lead the handbell choir. But widowed mother Reeny Landry is so hopeful - and her fatherless children so in need - that Graham agree to help.

Suddenly, the man who closed himself off is coming out of his shell. And he finds himself acting the father figure to Reeny's sweet mute daughter and loner son. But going from neighbor to husband is another matter altogether. Until a loving family teaches Graham to hear the heart's song.

"So you're really going through with this."

"Yep." Graham Lockwood shoved the last box into his Tahoe without glancing Mike's way. He'd said all he had to say on the subject last night.

"I can't believe you're leaving without telling anyone."

Graham slammed the hatchback shut. "I told you and Carla."

"Not until last night." Mike stared at him accusingly. "You must have had this move planned for a while now."

Graham only shrugged. Interviewing for this job had taken him out of town overnight twice in the past month and it appeared no one had noticed. Not even Mike, who was both his best friend and his brother-in-law. Or was one still considered a brother-in-law when the connecting link was gone?

He pulled his sunglasses out of his pocket and slipped them on. Mike was too perceptive by half.

Mike hunched his shoulders. "I know you needed a break after..." His Adam's apple bobbed. "well, after what happened."

"You can still reconsider," Mike added. "They haven't filled your position at J.T. Simmons yet. And Patty's ready to step down as the church's music director whenever you say the word."

"J.T. Simmons will find another teacher." Graham checked the back seat to make certain everything was properly secured. "As for the music director job, I meant it when I said I'm no longer interested." He hadn't set foot in a church since the funeral and didn't see that changing anytime soon.

He closed the vehicle door and forced a smile, trying to ease the tension. "Education is my vocation, but music's only a hobby."

"It's a God given gift," Mike insisted stubbornly. Then he gripped the top of the vehicle's driver-side door. "You've got friends here, Graham," he said quietly, "people who care about you. You owe them the chance to say good-bye."

"I don't want a big send off." He'd had enough of the sympathetic looks, the everything's-going-to-be-fine speeches and the pretend-nothing's-changed conversations to last a lifetime.

"But someplace called Ten Penny Ville, Louisiana?" Mike's lips quirked up in a smile that almost looked believable. "Are you trying to hide yourself in the swamps of Cajun country?"

"It's called Tippanyville." Graham nudged his sunglasses higher with the tip of his finger. "And it's closer to central Louisiana than the southern half. As for why I chose Tippanyville - the school there needs a new math teacher and it seems as good a place as any for a fresh start." Truth be told, what he needed was a complete change of scene. Something that didn't shove unwelcome reminders in his face every time he turned around.

He straightened. Time to go. "Give Carla and the boys my love."

Mike took his proffered hand, then impulsively threw his other arm around Graham's shoulder in a quick, masculine embrace before stepping back. "Carla wanted to be here to say good-bye herself. But with Andy running a fever..."

"I know. The kids come first, and that's how it should be." Graham tried to keep his tone even, but from the flicker in Mike's expression he knew he hadn't entirely succeeded. He was glad he had the sunglasses to hide behind.

Mike stepped back and jammed his hands in his pockets. "Whatever you're looking for, we'll be praying you find it."

Graham wanted to tell him to save his breath, that he didn't believe in the power of prayer anymore. Instead he gave a short nod, closed the door and turned the key in the ignition.

4-1/2 Stars TOP PICK "Griggs pens a terrific and lovely story of two people affected by grief and loss, but with God always there, waiting to help."

5 Stars Warm, Wise & Wonderful "On every page something happens that will make you feel good, feel inspired and feel a tug on your heartstrings! The cast is large. There are more than a dozen characters who you will care about and who will inspire you. The Heart's Song is a surprising book." You can read the entire review HERE

If you'd like to learn a little more about how this book came to be, check out my blog post over on the eHarlequin community group blog.

How my small town got its name

Tippanyville, the town where The Heart's Song is set, exists only in the pages of this book. To find out how I came up with that name, check out my blog post over on the The Pink Heart Society group blog.

An interview with Graham Lockwood

If you want to learn more about the hero of this book, you can check out an interview he did over at HERO INTERVIEWS.