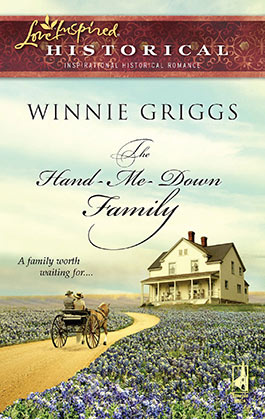 Callie Gray always assumed she would never marry, until she took a leap and became a mail-order bride. But when she arrives in Sweetgum, Texas, she gets the shock of her life. Her husband is dead, and his brother proposes she marry him, for the sake of his orphaned nephew and nieces. Jack Tyler warns her not to hope for a love match?theirs is strictly a convenient marriage. But Callie yearns for a true partnership with the man who has unexpectedly captured her heart. Now she must convince him what he truly needs is a lifetime of love, faith and family?with Callie by his side.

Callie studied the man seated across from her as the stagecoach swayed and bounced, bringing her ever closer to her new life.

She placed a finger to her chin. No, he wasn't a sea captain. The hat was all wrong and he had an air about him that seemed more akin to earthiness than saltwater.

She scrunched her lips to one side as she examined his features more closely. He was actually quite handsome, in a dangerous, rugged sort of way. Rather than detracting from his looks, that faded scar on the left side of his chin served to lend him an adventurous air. She refused to believe a man who looked as he did was anything so mundane as a farmer or shopkeeper.

He could be a Texas Ranger. Yes, that would fit. He had that lean, grim-purpose look about him.

She settled into her mental tale-spinning. So, if he was a ranger, what was his story? Perhaps he was returning home for a well-earned rest after grueling weeks of tracking down desperate outlaws. Or maybe he was traveling to Sweetgum on official business in search of—

Callie straightened in her seat. Was it her imagination, or had they slowed down a bit? A quick glance out the window confirmed that the tree-lined countryside had given way to scattered farms. And if she wasn't mistaken, the edge of a small town was just up ahead.

This was it. Her new home—Sweetgum, Texas.

She adjusted her poke bonnet with hands that weren't quite steady, then laced her fingers tightly together and closed her eyes.

Heavenly Father, I'm truly grateful to You for getting me all the way here from Ohio without a hitch. But we both know that was the easy part compared to what comes next. And since this whole undertaking was actually Your idea, I know You're going to help me figure out what to say and do when I step outside and come face-to-face with my new husband for the first time.

Bolstered by that thought, Callie began gathering her belongings. Then she paused and slanted a glance toward the object of her former musings.

Her unsociable traveling companion seemed completely unaware of their arrival.

Should she say something to him?

He'd climbed aboard at their last stop and, after the briefest of greetings, settled into the opposite corner, closed his eyes and hadn't moved since. Not that she resented his lack of attention.

After all, being this close to such a man was a new experience for her, and his closed-off demeanor had given her an opportunity to study him unobserved. Besides which, trying to concoct a history for him from only the hints provided by the rough and calloused look of his hands, his weathered complexion and his firm, wiry build had been an interesting way to pass the time.

One thing she'd decided about thirty minutes into her story-weaving was that, whatever his profession, he was not someone at peace with his world. There was something about his very stillness, about the hint of tension in his stubble-covered jaw, that pointed to a weary or troubled spirit.

Before she could make up her mind whether or not to disturb him, his eyes opened and their gazes collided. The lack of any residual drowsiness in those startling blue eyes made her wonder whether or not he'd truly been asleep.

The heat rose in Callie's cheeks. How mortifying to have been caught staring so rudely! She tugged on the edge of her bonnet again. Thank goodness it already hid most of her face.

"We're here," she blurted, then mentally cringed. Why did she always feel compelled to rush in and fill the silences?

He straightened. "So I see."

The hint of dryness in his tone warmed her cheeks even further. But the driver opened the door, rescuing Callie from more embarrassment.

As she rose to leave the coach, the glimpse of the dusty street and plank-lined sidewalk forcibly reminded her that she had left her familiar world behind. A bubble of panic rose in her throat.

What if Mr. Tyler was disappointed when he met her?

What if she couldn't learn how to adjust to life in this rural community?

Callie took a deep, steadying breath. Forgive me, Lord. I know we already wrestled with my doubts before the wedding. This is the ministry You gave me. Mr. Tyler and his daughter need me, and I need them. I—

Her companion studied her with a worried frown, no doubt wondering why she wasn't moving. After her earlier actions, he must think her completely addled.

Callie offered an apologetic smile. "Yes, I'm fine, thank you. Just making certain I have all my things." She adjusted her bonnet once more, squared her shoulders and stepped down from the stagecoach onto the sidewalk's dusty boards.

Pasting on what she hoped was a confident smile, Callie waited for her husband to step forward and introduce himself. But, while she received curious glances from some of the passersby, no one greeted her.

Her smile faltered. Where was he?

She continued scanning the sidewalk even as she moved aside to allow her fellow passenger to exit the stage.

Why wasn't Mr. Tyler here? Surely he wouldn't keep her standing alone in foreign surroundings where she didn't know anyone…

I will never leave thee, nor forsake thee.

The remembered verse calmed her. She wasn't alone. God was with her.

Mr. Tyler had undoubtedly been delayed. Poor man. He was likely as nervous about this meeting as she was. And he had little Annabeth to tend to as well. It must be difficult for him to care for a child and a farm all on his own.

Well, he wouldn't have to any longer.

Trying to ignore the stubborn prickling of anxiety that wouldn't quite go away, Callie turned to study the community that she would now call home.

Reviews for The Hand-Me-Down Family

"Griggs is a wonderful storyteller. The characters are well written, and even when they're stubborn, the faith message is interwoven throughout."