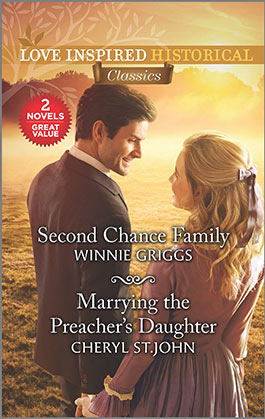 Can they leave the past behind?

Sheriff Mitch Hammond has vowed never to love again, for fear of wounding someone else. The most he can offer Cora Beth Collins is a marriage in name only. And with no other way to adopt two runaway orphans and keep her patchwork family together, she accepts. But despite his intentions, Mitch is starting to want more from Cora Beth…and from himself.

Bounty hunter Gabe Taggart is ready to settle down and set aside his past. Until his intervention in a train robbery leaves him injured and under Elisabeth Hart’s care. Despite his plans for a quiet life, antagonizing his feisty caretaker is the most fun Gabe’s ever had. Elisabeth provokes him, too, with her strong mind and kind heart. But will his dark history bar him from marriage to the preacher’s daughter?

Sheriff Mitchell Hammond wasn't buying that for a minute. The furtive way the boy had been sneaking out of the boardinghouse garden had guilt written all over it. In fact, Mitch's gut told him this kid was more than likely the culprit responsible for the rash of petty thefts that had plagued the town the past week or so. "Stop your squirming, son. I think maybe we need to talk about that bunch of carrots you have stuffed in your shirt."

The kid's voice had more than a touch of bluster to it.

Mitch tightened his hold on the boy's collar. "You don't say? Well, here comes Mrs. Collins now. Since she runs this boardinghouse and this here is her garden, why don't we see what she has to say about that."

Cora Beth Collins was bustling toward them. Even in the watery early morning light he could make out the concerned look on her oh-so-readable face, could tell that her honey-brown hair was pulled back in its usual tidy bun, could appreciate the way her crisply starched apron was tied around her trim waist.

Mitch frowned as he realized where his thoughts had strayed. He'd always considered Cora Beth a fine lady and a good friend. But lately he'd begun to feel something a little warmer than mere friendship when he caught sight of her.

And that was definitely not a good thing.

"What's all this commotion about?" Her breathless voice held an accusing tone that he was certain was aimed more at him than at the young scoundrel in his grasp.

Mitch tipped his hat with his free hand. "Morning, Cora Beth. Sorry if we disturbed you." He tilted his head toward his still-squirming captive "I caught this boy raiding your garden."

Consternation flitted across her face and then she gave Mitch a challenging look. "It's not raiding if he has my permission."

He wasn't surprised by her quick defense of the boy. Cora Beth had the softest heart in town - she'd give up her last crust of bread if she thought someone else needed it more. Especially if that someone was a kid. But he also noted that she hadn't actually claimed to have given the kid permission. And he hadn't missed the surprise and relief that flashed across the boy's face - a dead giveaway that his captive hadn't expected her to back him up.

"And did he?" It would be interesting to see how she answered him - she was too honest to out and out lie, no matter how much she wanted to rise to the kid's defense.

But to his surprise, she looked him straight in the eye, her expression free of evasiveness. "Actually, he's been weeding the garden in exchange for whatever produce he can carry." Then she glanced back at the boy and gave him an encouraging smile. "And a fine job you've been doing of it too, young man."

That gave Mitch pause. Had he been a little too quick to judgment with the kid?

The boy mumbled something that might have been a thank you, then glared up at Mitch, renewing his efforts to get free. "See, I told you I wasn't stealing. So, you gonna let me go now, Mister?"

But despite Cora Beth's staunch defense, Mitch wasn't quite ready to believe the boy was totally innocent. "It's sheriff, not mister. And hold still. I'm not through with you just yet."

"Go easy." Cora Beth put a hand out but stopped short of touching either of them. "He's just a boy, not some hardened criminal." Her expression softened as she turned to his captive. "What's your name?"

Mitch raised a brow. So he'd been right to be suspicious. "Now that's mighty interesting. He works for you, but you didn't bother to learn his name."

Cora Beth's expression reflected a mix of guilt and bravado, but she refrained from responding.

Keeping his amusement in check, Mitch turned his attention back to the closed-mouth youth. "The lady asked you for your name son."

"Ethan." The boy dug a toe into the ground and his tone was surly, grudging.

"Got a last name to go with that?" Mitch asked.

No response other than a tightening of the lips.

Cora Beth placed a hand on her supposed-gardener's shoulder. "You know, my brother Danny is twelve-years-old. I'll bet you're just about the same age, maybe a little older."

"I'm eleven." The boy's suddenly straighter posture bespoke a pride that was no doubt due to the fact that she'd erred on the plus side.

"Is that right?" she said. "Well then, you're a very mature eleven." Then she cocked her head to one side. "Have you had your breakfast yet?"

The boy shook his head, and his rebellious expression flashed into something more akin to hunger before he guarded it once more.

From the looks of the kid, Mitch would guess it'd been a while since he had a decent meal. But he'd landed on the right doorstep, figuratively speaking, to take care of that. If there was one thing Cora Beth could do exceptionally well, it was cook.

Sure enough, she straightened and gave a nod toward her back porch. "Well, we're going to do something about that. You come on inside. I just took the biscuits from the oven and it won't take more than a few minutes to scramble up some eggs."

Ethan scowled up at Mitch. "I don't think the sheriff'll let me go." Cora Beth tossed Mitch a look that on another woman he would have called saucy. "Well then I guess we'll just have to invite him to join us."

Mitch touched the brim of his hat, giving her an answering smile. "Now, how could I turn down such a gracious invitation?"

She placed a hand on the boy's shoulder, her gaze still locked on Mitch's. "You can let go of him now. He's not going anywhere, at least not until he's had his breakfast." She gave Ethan a smile. "Are you?"

Mitch repressed the urge to roll his eyes at the boy's overly-docile tone. Cora Beth might trust him not to make a break for it but Mitch wasn't so gullible. Maybe because he had more experience with other individuals who wore the same hunted look he'd seen on Ethan's face. Likely as not, the kid would bolt at the first opportunity. He kept a close eye on the boy as he let the two of them precede him. Stepping inside the large kitchen of the boardinghouse, Mitch removed his hat and hung it on a peg by the door. "Nothing like the smell of fresh baked biscuits to get a man's stomach to rumbling."

That earned him a smile from Cora Beth. "You men folk take a seat at the table and I'll have your eggs and bacon cooked up quick as a cat's pounce."

Mitch smiled a thank you before he pulled out a chair, careful to seat himself between the boy and the door. "You're in for a treat." He kept his tone friendly. "Mrs. Collins is the best cook in these parts."

The boy seemed a little more relaxed now. Was he ready to answer a few questions? "You're not from around here, are you?"

"No." The bitter edge to the boy's tone was unexpected. Mitch filed that impression away to mull over later and continued his questioning. "So where are you from?"

The boy shrugged, not meeting his gaze. "Here and there. We move around."

?We' was it? So he wasn't traveling alone. "Who all makes up that we?"

Ethan clamped his lips shut, then looked past Mitch. "Is there something I can do to help you, ma'am?"

Cora Beth smiled over her shoulder. "Why thank you Ethan, but I have it all under control."

Mitch reclaimed the boy's attention. "I asked you who you were traveling with."

He saw Ethan's internal struggle play out on his face. "My pa likes to travel," he finally blurted out.

Something in the boy's demeanor gave Mitch the feeling that Ethan was holding something back. But before he could press further, Cora Beth looked back over her shoulder.

"Your mother doesn't travel with you as well?" she asked.

"My ma's dead." There was no heat in his answer this time - only a starkness of tone and expression.

Ethan looked up to acknowledge her concern. "Thank you, ma'am. I miss her a lot."

Mitch, who'd lost his own mother at a young age, felt a tug of matching sympathy for the boy. But he couldn't let his feelings get in the way of his job. Learning what he could about the boy's situation - not feeling sorry for him - was the best way to help him. "And where is your pa right now?"

Ethan glanced back at the table. "Our camp is set up a couple of miles outside of town."

Before Mitch could press further, Cora Beth set a plate in front of each of them. "That's enough with the questions for now, Sheriff. Let the boy eat."