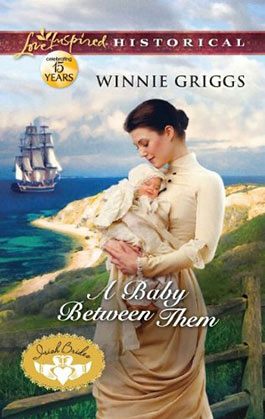 For two months, Nora Murphy has cared for the abandoned infant she found on their Boston-bound ship. Settled now in Faith Glen, Nora tells herself she's happy. She has little Grace, and a good job as housekeeper to Sheriff Cameron Long. She doesn't need anything more - not the big family she always wanted, or Cam's love...

A traumatic childhood closed Cam off to any dreams of family life. Yet somehow his lovely housekeeper and her child have opened his heart again. When the unthinkable occurs, it will take all their faith to reach a new future together.

Cameron Long set the two empty cups on the small side table that had been reserved for just that purpose. The three Murphy sisters stood together, pretty as butterflies in a spring meadow. Maeve was the smallest of the bunch, with delicate features and flame colored hair that caught the eye immediately, but she also had a presence that let one know there was more to her than mere looks. Bridget, the middle sister was tender-hearted and had a softly feminine look about her, which that never-quite-under-control hair of hers only emphasized.

But to his way of thinking, Nora was the most interesting of the trio. He supposed it was the contradictions he sensed in her that intrigued him most. From the moment he'd first set eyes on her - tall and willowy with her hair pulled back in that tight little bun and her posture perfectly straight, she seemed to exude a non-nonsense air of practicality and discipline. But then the infant she held had made some noise or movement that commanded her attention and her expression suddenly softened and she'd cooed some nonsense or other to calm the baby, and he'd glimpsed another side of her entirely. From that day forward he'd made a point of trying to get to the truth of who the real Nora Murphy was beneath her prim facade. He'd found her by turns amusing, irritating and bossy.

Looking at her today, he saw something new. Her dress wasn't as frilly and fussy as the get-ups her sisters wore, but for once she'd worn something besides those serviceable homespun dresses she generally favored. The bright blue color and simple lines suited her perfectly. And while her sisters seemed softer and more relaxed than Nora, that touch of steel in her intrigued him.

Of course, she was a smidge on the bossy side too, but he figured he could give as good as he got in that area. Truth to tell, it was a bit fun to watch her hackles rise and her finger start wagging and poking when she got riled.

All in all he was quite pleased that he'd ended up hiring Nora as his housekeeper instead of her sister. In fact, if he were the marrying kind, he probably set his sights on someone just like her. Not that that was either here nor there. He'd decided long ago that he most certainly wasn't the marrying kind, and never would be. A man with a history like his had no business raising kids. It's why he never let himself get too close to any of them.

Shaking off those gloomy thoughts, Cam focused on the Murphy sisters again, then frowned. Something seemed to have upset his no-nonsense housekeeper. Not that she was making a big show of it, but he could tell by the appearance of that little wrinkle that furrowed above her nose whenever she was fretting over something. What could have put that crease there on what should be a happy day for her?

Before he could decide whether or not to saunter back over, the air seemed to clear and the sisters were hugging again. A tiny wail from the vicinity of the cradle diverted all three women's attention and Nora bustled over to tend to Grace. But he could sense the eldest Murphy sister still fretted over something.

Perhaps he'd find out just what was bothering her when he offered her a ride home after the reception.

4 Stars "Set in Massachusetts in 1850, this is a delightful conclusion to the entertaining Murphy sisters trilogy."

Interview with Cameron Long, hero of A Baby Between Them

You can find the Crafty Ladies interview of Cameron by following this link.