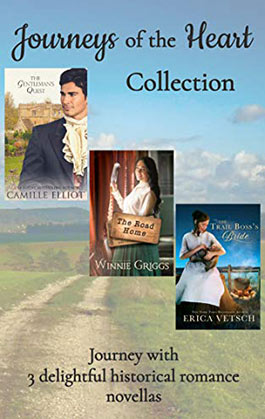 Wyatt Murdoch feels his life is over—his career certainly is. In fact, he’s agreed to escort two orphans halfway across the country mainly because he needs a distraction. But when the task proves more than he bargained for, he seeks help from the exotic beauty with the talkative parrot who befriended the children when they slipped away from him.

Anisha Hayes, who’s hiding wounds of her own, has left her uncomfortable home to seek adventure. However, something about this unorthodox trio touches her heart, so when Wyatt asks for her help she agrees to put her plans on hold to accompany them. After all, it's only a temporary detour.

But when they reach their destination, both Wyatt and Anisha find it’s not as easy to part ways as they’d planned...

Where had they gotten off to?

Wyatt Murdoch's irritation was turning into worry. This was the third time his two young charges had tried to slip away from him on their journey from Indiana to Texas, and they'd only made it as far as Arkansas. Thank goodness they'd reach their destination tomorrow. Of course, that assumed he found them before the train left. This was the longest they'd managed to keep out of his sight and the train would be resuming its journey in less than twenty minutes.

Why did they keep running away when they had no place to go? And how could a ten year old girl and eight year old boy have so completely disappeared when he'd only turned his back for a moment?

He bore a large part of the blame, of course. He should have paid closer attention when he saw them whispering together as they pulled into the station. He just figured they were shutting him out of their conversation, just as they'd done for most of the trip.

He supposed he couldn't really blame them for wanting to get outside and enjoy the fresh air and warm spring sunshine, especially when they'd been cooped up on the train for four very long days. But they could have just asked him.

They were nowhere in sight. He scanned the horizon and caught sight of the circus tents off in the distance. Of course. That would have drawn Hallie and Jonah like ants to a picnic.

He started off in that direction at a fast walk. If they missed the train because of this nonsense...

He was some distance from the circus tents when he caught sight of his charges. But they weren't alone. A woman, small in stature but big in presence, walked between them holding onto a hand of each. There was something faintly exotic-looking about her-it had something to do with the warm golden color of her skin and the shape of her eyes.

There was also the fact that she wore some kind of padded leather affair on her left shoulder, and regally perched upon that shoulder was what looked like a large gray parrot.

Someone associated with the circus, no doubt. Was she an actual performer or just an assistant?

More importantly, had she caught the children trying to sneak into the big top or one of the side shows? Or worse yet, had they gotten too close to her parrot and hurt it in some way?

He hoped she was looking for their caretaker-namely him-and not the sheriff. But from the frown on her face and stiff determination of her posture, she was obviously unhappy about something.

He quickened his pace. "You two have a lot to answer for," he said as soon as he reached them.

But it was the woman who responded. "You are the person responsible for these children?"

He noticed that she had a faint accent of some sort, but he couldn't quite place it. "I am. And I apologize for whatever they-"

She cut through his apology. "It appears you are not doing a very good job of watching out for them."

Her accusation and tone got his back up. "Keeping up with them is not the easiest job in the world."

"So watching over them is your job? Are you their nanny?"

There were muffled giggles from the children at the bird's echoed words, which Wyatt chose to ignore.

He tugged on his cuff, trying to maintain his dignity. "No, I am not their nanny," he said. "I am their escort. Now if you will just hand them over, we have a train to catch."

If anything, the woman clasped their hands tighter. "They tell me they ran away because you have not been treating them well."

Wyatt glanced from Hallie to Jonah, making his displeasure clear. Another loud squawk from the bird did nothing to smooth his temper. "What you should know about these two runaways is that they are not only slippery, but they also lie."

Her frown only deepened. "Those are harsh words to use about children, sir."

How in the world had he gotten into this ridiculous discussion with a circus performer? Before he could respond, she turned to the children.

Her expression was that of a schoolmarm handing a failing grade to a favorite student. "Have you been telling me untruths?"

Both children shook their heads vigorously.

"He doesn't let us do anything fun and he's always fussing," Hallie said.

"Anyone can tell he doesn't even like us," Jonah added.

The woman once again turned an accusing look his way.

But it was his turn to cut her off before she could speak. "That is neither here nor there, madam. It is my job to escort these children safely into the keeping of their great-uncle, and I intend to do just that.

Now, I don't have time to stand here and argue with you. We need to be on that train when it pulls out from the station." He held out his left hand, keeping his right carefully down at his side. "Come along you two."

The children looked up to their circus-performer friend, obviously ready to ask for her support. Had they formed such a quick bond because of the exciting nature of her life? Or was it just that they thought anyone better than he?

To his surprise, the stranger gave them a shake of her head. "Go on with your escort as he asks. It's his job to keep you safe. And you should apologize for causing him worry, even if you don't think he likes you. He may not be the most pleasant of people, but he is trying to look out for you, and you should respect him for that, not make his task more difficult." She shot him a quick glance, then turned back to the children. "Besides, I'm sure he's not really a bad man at heart."

Was that condescension in her tone? His irritation changed to shock when the children came to him without further argument.

Wyatt was dumbfounded. How had she gotten these two mischief makers to obey her without argument?

"She has a parrot," Hallie informed him.

"So I see." His dry tone seemed lost on the children.

"And it talks." Jonah said this as if it were the most amazing of miracles.

Apparently this was their idea of being nice to him. The train whistle sounded a warning. It would be pulling out of the station in just a few minutes. "We'll discuss this more once we're back on board the train. For now we need to make certain it doesn't leave without us. Tell this nice lady good-bye."

The children reluctantly obeyed, saying their farewells to both the woman and her pet. Then, careful to use his left hand, Wyatt took Jonah by the hand and Hallie took Jonah's other hand and they started back to the train at a fast walk. A moment later, he realized the woman from the circus was hurrying alongside them. He didn't know her name, and he didn't have time to ask. Without pausing, he turned to her. "There's no need for you to accompany us. I assure you, I have them under control now."

"I'm sure you do, but I don't want the train to leave without me either."

He almost missed a step at that. "But...I mean, aren't you part of the circus?"

Her grin told him she was enjoying his discomfiture. "No, I arrived here on the train, just as you did."

Then how had she ended up with Hallie and Jonah? Had she had a hand in their escape?

But there was no time to discuss that now.

The woman reached for Hallie's hand, smiling down as the girl released her brother's. "What do you think?

Can we females beat the menfolk back to the train?"

With a delighted smile, Hallie nodded, and the two of them broke into a very hoydenish sprint.

For a moment Wyatt was caught off guard.

But not Jonah. He tugged impatiently at Wyatt's hand. "Come on. We can't let a couple of girls beat us."

Wyatt gave in and broke into a run. Not that he'd let the impertinent woman goad him into it, he told himself. It was just that he didn't want the train to leave without them.

Of course, he could only run as fast as Jonah, and the girls did have a head start, so the outcome of their so-called race was a foregone conclusion.

Wyatt didn't share his companions' amusement at the outcome. Really, this unorthodox woman seemed almost as much a child as his two charges.