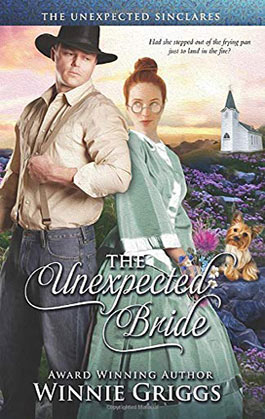 A Marriage of Convenience…

Fleeing a broken engagement, Elthia Sinclare traveled to Texas to become a governess. She arrived to find six children, not two; a man who had ordered a bride, not a teacher; and a household that needs someone to cook and clean, not read Latin. But the one thing worse than marrying Caleb Tanner was returning home in defeat, so the former socialite said “I do”, rolled up her sleeves, and went to work --burning meals, flooding the kitchen… loving the children. And butting heads with her new spouse.

Until Elthia realized she has learned how to stand on her own two feet and fallen head over heels for her handsome husband. Now, her biggest challenge lay in convincing the stubborn Texan their arrangement was something more than a way for him to adopt his orphaned nieces and nephews, something more than just a temporary marriage. It was a union of two soul mates.

The lying, scheming blackguard glanced back from his position at the stove, a scowl of irritation on his face. Then his expression changed as something in her demeanor caught his attention.

“What’s happened?” he asked, handing a plate to one of the children.

Zoe slipped into the room behind her, but Elthia kept her gaze focused on Mr. Tanner. She stood stiffly, fighting the urge to back away as he approached. “Exactly why did you bring me here?”

His scowl returned as he rubbed the back of his neck. “What do you mean? This is my home. Where else would I take you?”

“I’m talking about what role it is you expect me to fulfill?” She watched him closely, looking for some sign of guilt or duplicity. “Mrs. Johnston called me your helpmeet and referred to you Tanners as my ‘new family’. Just now, Dr. Adams did the same.”

Elthia clasped her hands to prevent their trembling. Had this man lured her to his home under false pretenses? She was completely at his mercy here. The isolated location and the shadowy approach of dusk suddenly took on a sinister feel. Sometimes having a vivid imagination was more of a curse than a blessing.

She had to remain calm, to think, to keep him from seeing her fear.

“I’m sorry that your role as a mail-order bride is public knowledge, if that’s what this is all about. It’s hard to keep secrets in a community like Foxberry.”

His scowl returned. “Miss Sinclare, stop the hysterics, please. I know the kids’ illness was unexpected, but surely—”

“There’s been a mistake, a dreadful, terrible mistake.”

His eyes narrowed. Then he looked at the children who watched the grown-ups with wide-eyed interest. “Let’s move this discussion to the parlor, shall we?”

He nodded to the two older children. “Zoe and Peter, you help the others with their supper please.” Then he took Elthia’s arm and all but pulled her out of the room.

As soon as they reached the parlor, he released her, as if touching her were distasteful. His next words were all the more intimidating for their softness. “Backing out already? So much for all that talk about honoring commitments.” His expression branded her as beneath contempt. “I should have known a pampered bit of high-class fluff wouldn’t have a notion about honor or responsibility.”

Elthia shook her head, confused and defensive. “No, no, you don’t understand. I came here to fill the post of governess, not to be someone’s mail-order bride.”

The sound he made was suspiciously like a snort. “Foxberry has a great school. Why would I waste money on a governess?”

“But that’s what you advertised for. I read the file myself.” A spurt of anger momentarily replaced her fear. “How dare you misrepresent yourself in such a way! You took advantage of Mrs. Pembroke and of me. It’s vile and probably illegal. I have half a mind to find the local sheriff and have you arrested.”

Mr. Tanner wasn’t intimidated. “I did not misrepresent anything. I made it very clear to the agency exactly what I was looking for. If you paid any attention at all to my post there’s no way you could be confused about any of this.”

She drew in a breath as he pointed a finger, stopping just short of poking her chest.

His frown turned contemptuous. “If this is some ploy to get out of the contract and still be able to hold your head up, don’t bother. A weak, spoiled, lady with a tendency to run away from her troubles might be the last thing I want for the kids or myself, but I warned you earlier, no backing out once the kids met you.”

“I’d appreciate it if you’d keep your voice down,” he interrupted. “There’s no point in upsetting the kids.”

He straightened. “I don’t have time for this posturing. If you’re not going to help, at least stay out of the way. In the meantime, before you try that ‘I didn’t know what I was getting into’ story again, you should reread that contract you signed.”

Elthia watched him stalk out of the room. Slumping, she steadied herself with a hand to a chair. The long day and its emotional ups and downs had taken its toll. She suddenly felt too exhausted to think straight. Maybe her father was right. Maybe she was too helpless, too naïve, to make her own decisions.

How had this happened? Was Mr. Tanner a villain or had there been a terrible mix-up with the paperwork at the agency?

Of course. He’d told her to reread the contract and that’s just what she’d do, and then force him to do the same. She wasn’t her father’s daughter for nothing. She’d read that sheet of paper very carefully before signing it. It was an employment contract for a temporary teaching assignment, nothing more.

Feeling her energy rebound, she hurried into the hall. Her copy lay somewhere in her luggage, but he still had the one she’d given him. “Mr. Tanner, just a minute please.” Stepping into the kitchen, she ran smack into his rock-solid chest.

He placed a hand on both of her arms, steadying her before stepping back a pace. “Well, Miss Sinclare, what is it now?”

Elthia’s cheeks heated but she held onto what dignity she could. Pushing her glasses up on her nose, she managed to keep her gaze locked to his as she held out a hand. “The contract, sir. I’d like to see your copy of it if I may.”

He raised an eyebrow. “And just what do you expect that to prove?” Then he scowled. “I warn you, don’t try to tear it up.”

She raised her chin. “Why would I want to tear it up? It’s the proof I need to support my story. It states quite clearly that the position I accepted was that of governess.”

Elthia frowned impatiently. “Yes, of course it does. You read it there at Whistling Oak. Surely you remember what it said. There was nothing at all vague about the terms.”

“I agree, it spells things out in very plain language.” He strode out of the room and she followed him as far as the foot of the stairs. It only took seconds for him to return and hand her the document.

Elthia, itching to rub the I’m-only-doing-this-to-humor-you expression from his face, unfolded it and skimmed it.

She read it twice. Where had this contract come from? It most definitely was not the document she’d read so carefully before signing. Someone had switched papers, but when and how? They’d hardly been out of her sight since she’d signed them.

It must have been Mr. Tanner. He’d somehow substituted the document she’d handed him for this one. Her gaze frantically turned to the bottom of the contract and she got another shock.

There was her name, penned in her own handwriting. Alongside it was the signature of Louella Pembroke. It must be a forgery, but it was such a good one even she couldn’t tell the difference.

How dare he try to coerce her this way. She shook the document under his nose. “How did you do this?”

“Do what?” He looked more puzzled than guilty.

“Forge my signature so perfectly. Did you trace it? And where’s the real contract?”

His jaw tightened and his eyes narrowed at her accusation. “Don’t you think you’re carrying this charade a bit far?”

“Don’t think you can intimidate me with that oh so superior tone. I have my own copy of the contract.”

She turned and all but fled upstairs. If he thought he could bully her with this elaborate act he wasvery much mistaken. It took her a several minutes, but she finally located her copy in the larger of her trunks.

Marching back down the stairs, she found Mr. Tanner still standing where she’d left him, though now the lamps in the hall were lit against the encroaching darkness.

She waved the paper triumphantly. “This is the document I signed, not that substitute you’re trying to fob off on me.”

With the air of an adult humoring a child, the infuriating Mr. Tanner plucked it from her fingers, pulled the contract out of the sealed envelope and looked it over quickly.

After reading it, he shrugged and handed it back to her. “I won’t argue with you on that score. But I don’t rightly see how it differs from the one I looked at earlier.”

Her hands starting to tremble, Elthia took the contract and forced her eyes to focus on the print. He was right, it was identical to the one he’d handed her a few minutes earlier.