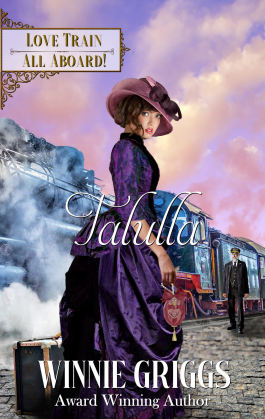 Will returning home bring Talulla the peace that’s eluded her for half her life?

Ten-year-old Talulla watched in horror as her beloved brother fell through the ice while trying to save her. Thanks to the quick actions of Max, her brother’s closest friend, she survived. Her brother didn’t. When she overhears Max and her father discussing that she’s to blame, Talulla feels betrayed by those she thought she could most trust. A boarding school becomes her refuge, and she never looked back. Until now.

Widowed father Max is traveling home with his young daughter. Unfortunately, a bad case of travel sickness overtakes the little girl, and Max turns to the conductor for help. When the man finds a passenger willing to share her Pullman section, Max is relieved—until he discovers their benefactor is Talulla, a woman whose last words to Max were an impassioned I hate you.

Can these two find a way to push past their mutual distrust to regain the friendship they once shared. And perhaps something more…

[For context, Tally and Max were childhood friends but a tragic accident that resulted in the death of her brother changed all that. She went away to boarding school and it’s been twelve years since they’ve seen each other. Max is now a widowed father and he and his young daughter Bonnie are traveling home on a train in the crowded coach car when Bonnie falls prey to travel sickness. The conductor finds a passenger with extra seating in her Pullman section who agrees to share her space with the sick child. Here is how the first meeting goes.]

A split second before Henry made the introductions, recognition kicked Max in the gut. Tally!

Max saw her stiffen, as he was certain he had. He gave a short nod. “Tally.”

“Max?” Her tone conveyed shock, as if she’d just bitten into something that was unexpectedly sour.

Henry looked from one to the other of them in obvious delight. “So you two know each other?”

Max nodded. “We do. Or at least we did, many years ago.” Tally Alden—the flesh and blood reminder of one of the lowest moments and biggest regrets of his life. No wonder she’d seemed familiar out there on the platform and that he’d thought of her earlier.

The conductor rocked back on his heels looking very pleased with himself. “Well this is excellent. You can get reacquainted and there won’t be any of that awkwardness strangers experience when meeting each other for the first time.”

Max barely managed to keep from rolling his eyes. If Henry only knew.

Then Max shifted, settling Bonnie more comfortably in his arms. Tally seemed to collect herself at that. She waved to the upholstered seat across from her. “Please, lay your little girl down. And have a seat as well.”

She glanced from his daughter to the conductor. Anywhere but at him it seemed. “I know you’re not a porter, but would it be possible to get a blanket for Bonnie?”

The conductor touched the brim of his hat. “I’ll see to it right away. And if there is anything else I can do to make this new seating arrangement more comfortable for the three of you please let me know.”

Max hesitated, not sure he was truly welcome. But another fretful movement from Bonnie settled the matter. He took the seat across from Tally, laying Bonnie gently down with her head in his lap. “I know you and I didn’t leave things on the best of terms when we were last together.” A definite understatement. That eyes-blazing declaration that she hated him had been the last words she’d spoken directly to him before today. “But I’m very grateful that you’re doing this for Bonnie.”

She folded her hands in her lap. “Your daughter is an innocent and she’s suffering. I wouldn’t be so cruel as to turn her away.”

Her tone and cold look said that the characterization of innocent didn’t extend to him. It seemed she still hadn’t forgiven him.

“You look good Tally, all grown up. I wouldn’t have recognized you as that gangly, freckle faced girl I remember.” This poised, graceful, fashionable woman was nothing like the little tomboy who used to follow him and her older brother around with sometimes annoying persistence, wanting to be included even when her presence wasn’t welcome.

She smiled, though it didn’t extend to her eyes. “No one’s called me Tally since I left Windflower.” A shadow crossed her face. She was no doubt remembering Jamie, the one who’d given her the nickname.

“Would you prefer Talulla?” he asked quickly. “Or Miss Alden perhaps?”

He leaned back, careful not to jostle Bonnie, and studied her a moment as she fiddled with a chain at her neck, her gaze once more focused elsewhere. Max finally decided it was up to him to carry the conversation. “So what takes you home after all these years?”

She tucked a tendril behind her ear, her expression closed off, just short of hostile. “There’s an heirloom I’m supposed to inherit on my twenty second birthday, which happened this week. My father is holding it hostage until I come to personally collect it.”

Good for Rupert. “Then let me offer you a belated happy birthday. And I’m sure your father will be happy for the opportunity to see you again, whatever the reason.” He couldn’t resist adding “It’s been some time since you were last home, hasn’t it?”

Tally’s eyes narrowed at that.