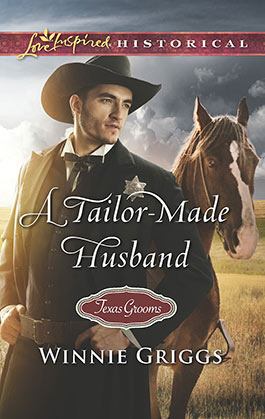 From Bachelor Sheriff to Family Man

Tired of pining for handsome sheriff Ward Gleason, seamstress Hazel Andrews plans to head East for a fresh start-until Ward finds an abandoned child. Hazel can't turn down his request that she watch the little girl while he investigates a spate of crimes. But spending time with Ward is sending local gossips-and Hazel's heart-into turmoil.

Nothing in Ward's world is the same since he took charge of orphaned Meg…and that includes his growing feelings for Hazel. A fake engagement will allow them to care for the child together until Hazel moves away and finds someone more worthy. But with little Meg convinced she's already found her forever family, can Ward and Hazel dare to make her dreams come true, along with their own?

Ward had hoped to put off this conversation at least until after the funeral, but he could see now that that had just been wishful thinking. Hazel had never been able to hide her emotions and her expression practically screamed with the questions playing out in her mind.

The thing was, he'd felt off balance ever since he'd realized Freddie wasn't coming back. He was certain that was why he'd experienced such an unexpected flood of relief when he spotted Hazel waiting for him on the platform earlier.

At least relief was how he chose to describe what it was he'd felt.

Not that she was hard to spot-she tended to stand out even in a crowd. And it wasn't just her red hair. As a seamstress she took full advantage of the skill and materials at her disposal. Even though she wore a dark colored dress today, a departure from her usual bright colors, she hadn't resisted adding what he thought of as 'Hazel touches' to it. The elegant bits of ribbon and lace she added to her frocks and the feminine fit were part of her trademark style.

Shaking off those wayward thoughts, Ward took Hazel's arm and drew her a few feet away from where Meg sat, making sure he could keep an eye on the child in his periphery. Ignoring the familiar scent of orange blossoms that always seemed to cling to her, Ward launched immediately into a quick explanation. "I know you have a lot of questions, but there's not really much to say right now. The short version is that Meg and her brother boarded the train a few stops past mine, then the brother slipped away at the very next stop, abandoning his sister. I'm looking out for Meg until I figure out what to do with her."

Hazel's eyes widened and he saw the genuine sympathy reflected there. "Oh my goodness. That poor baby." She glanced toward Meg. "How awful for her. I hate to contemplate what could have happened if you hadn't been the one to take charge of her. But how-"

He raised a hand to stem the flow of words. "I'll answer all your questions, or at least tell you as much as I know, after the funeral."

"Of course." She bit her lip a moment. "You called her Half-pint," she said softly.

He rubbed the back of his neck, feeling unaccountably self-conscious. What was wrong with him? "It sort of slipped out the first time." He shrugged. "It's just a silly nickname." But they both knew it was more than that.

Hazel nodded. "I think it's the freckles and pigtails." Then she turned and gave him a probing look. "But she's not Bethany."

Did she think he was being overly sentimental? "Of course not." Then he quickly changed the subject. "Is everything in place for the funeral?"

Her raised brow said quite clearly that she knew he was avoiding the subject. But she followed his lead. "Yes. Reverend Harper will preside at a graveside service at one o'clock, just as you requested."

Before he could say more than a quick thank-you, they were interrupted.

"Sheriff Gleason, glad to have you back in town."

Both he and Hazel turned at the hail.

Ward straightened when he realized it was Mayor Sanders. The man wouldn't be here unless there was town business to discuss.

Hazel spoke up first. "Good day, Mayor. Are you here to meet someone?"

Ward was surprised to hear a slightly confrontational tone in her voice. Was she at odds with the mayor over something? That thought brought out his protective urges.

"Actually, I came to see Ward." The mayor tugged on the cuff of his shirt. "Official town business."

She pursed her lips. "Surely whatever you have to discuss can wait. Sheriff Gleason just returned from his sister's deathbed. And now he has to get ready for her funeral."

He relaxed, realizing she'd gotten her back up on his behalf. She was certainly a magnificent sight when she got riled up, all flashing eyes, ruddy cheeks and battle-ready posture. But in this instance her well-intentioned interference was unnecessary. This was his job. "I assume there was some kind of trouble while I was gone?"

The mayor turned from Hazel back to him with a relieved nod. "I'm afraid so. There's been another incident and it's likely the same scoundrel who hit the Lawrences' and the Coopers' places. Only this time they've moved right into the heart of town."

Hazel spoke up again, her foot tapping impatiently. "Pardon me, gentlemen, but this seems to be a discussion that can wait until after the funeral."

Mayor Sanders shot her an apologetic look. "I'm sorry. I certainly don't expect the sheriff to do anything about this today. But I wanted him to hear about it straight away in case he runs into some talk or complaints from other townsfolk."

"Quite right." Ward gave Hazel a firm, not-your-business look before he turned back to the man who was, in effect, his boss. "Let's go to my office so you can fill me in on the details." Then he hesitated, looking over at Meg, remembering he wasn't as unencumbered as he'd once been.

He shifted his gaze to Hazel, hoping she could read his unspoken request.

And of course she did. Taking her cue, Hazel smiled down at the child. "Meg, why don't you come with me while Sheriff Gleason and Mayor Sanders take care of a little business?"

But Meg popped up from the bench and clutched at Ward, her eyes wide with apprehension. Poor Half-pint, being abandoned by her brother had obviously made her anxious about any hint of being cast aside again.

As usual, Hazel rose to the challenge. Without further prodding from him she stooped down to get on eye level with Half-pint. "We can take Chessie and Pugs with us too. And I'll introduce all of you to Buttons."

Hazel's eyes widened as if she couldn't believe Meg didn't already know. "Why, Buttons is just the prettiest and smartest cat you've ever seen."

Ward refrained from rolling his eyes at that clearly overblown description and placed a hand on the child's head, trying to reassure her. "It'll be okay Half-pint, it's just for a little while." Wasn't that the same promise Freddie had made to her? "I'll come on by to get you later on my way to the funeral."

Ward ignored the startled look on the mayor's face-a sign of what he could expect from his fellow townsfolk over the coming days, no doubt-and turned to Hazel. "Thank you," he said, touching her arm. "I'll come by the dress shop as soon as I'm able."

She nodded, her eyes widening slightly. He pulled his hand away quickly, wondering if she'd felt that same spark of awareness.

What was wrong with him?

She recovered quickly and her eyes flashed a warning. "Then we're going to talk."

He watched as she bent to pick up Pugs. Then she took Meg's hand with her free one and began regaling the little girl with tales of her cat's exploits.

Once again Hazel had stepped in to help without the least hesitation. Strange how he'd gotten used to always having her to count on. And she never let him down.

Then, shaking off thoughts of the usually-flamboyant-but-always-dependable seamstress, he shifted into his businesslike frame of mind and turned back to the mayor. "Let's go over to my office and you can give me the details."