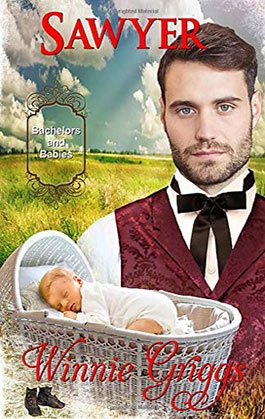 Sawyer Flynn vows to see that the man who murdered his brother pays for his crimes, but becoming the sole caretaker of an orphaned infant sidetracks him from the mission. Sawyer can’t do it all—run his mercantile, care for the baby, and find justice for his brother. He needs help. But not from Emma Jean Gilley.

When her father flees town after killing a man, Emma Jean is left alone to care for her kid brother, but her father’s crime has made her a pariah and no one will give her a job. Learning of Sawyer’s need, Emma Jean makes her case to step in as nanny.

Sawyer is outraged by Emma Jean’s offer, but he’s also desperate and he reluctantly agrees to a temporary trial. Working together brings understanding, and maybe something more. But just when things heat up between Sawyer and Emma Jean, the specter of her father’s crimes threatens to drive them apart forever.

Sawyer watched the Anderson sisters make their exit, then breathed a sigh of relief. It was the first break he’d had all morning. Normally he’d be glad to have so many folk come through the mercantile, but today’s rush of visitors had more to do with curiosity than the need to make purchases.

And after the night he’d had last night, it was all he could do to respond to the more blatant busybodies with some modicum of tact.

If that was what he had to look forward to in the next several weeks, he didn’t know how he was going to make it. He sure hoped Mrs. Martin had found him a good helper. At this point he’d settle for just fair credentials.

Another yawn escaped him, and he thought longingly of the cot he had back in the storeroom. Perhaps he could close the store for just an hour or so and—

Before he could put thought to action, the shop bell sounded. Scrubbing a hand across his face, he turned to greet his new customer.

All thoughts of sleep fled as he recognized the brown-haired female standing hesitantly just inside the doorway.

Emma Jean Gilley had had the good sense to avoid his shop since the day her father murdered Lanny. What was she doing here now? Did she honestly think enough time had passed that his anger would have cooled?

He crossed his arms over his chest, staring her down as he waited for her to speak first.

Emma Jean brushed at her skirt nervously, then squared her shoulders, her green eyes reflecting determination. “Mr. Flynn, I’m wondering if I might speak to you about a business matter.”

Not the opening he’d expected. “If you’re looking to reopen your line of credit, I’m afraid I can’t do that.”

Her cheeks reddened but she shook her head. “That’s not why I’m here.” She took a deep breath. “I understand you’re looking for someone to take care of that young’un you’ve taken in.”

His temper ratcheted up a notch. She couldn’t be serious. “And you think you’re the person for the job?” He’d as soon hire the town drunk.

He thought again about her profiting from her father’s thieving. She’d had the gall to flaunt it with the purchase of a fancy loom that arrived the day after they laid Lanny to rest. It was like a slap in the face to him and the rest of the town.

If it was money she needed, let her collect on the reward he’d offered for the capture of the low-down snake of a man that was her father.

Emma Jean winced at his biting tone. She’d known this wasn’t going to be easy, but she’d hoped it would at least be civil.

She’d paused on the threshold because of her surprise at the changes in Sawyer. She hadn’t been to the mercantile since that awful day last summer, so she hadn’t seen him up close in that time. He still had the same brown hair, the same ruggedly square jaw, those piercing dark brown eyes, and the small scar on his chin. But the easy manner, the friendly smile and openness were gone. There were lines etched in his face that hadn’t been there just four months ago. He looked tired, but more than that, he looked closed off and bitter. Chalk up another victim of her pa’s crime.

Was the hardness in his eyes when he looked at her a part of him now, or was it reserved just for Gilleys?

Regardless, she had no choice but to press on.

She lifted her chin and played the only card she had. “I do. For one thing, I won’t charge you any money for my time.”

Instead of softening his demeanor, her words just seemed to make him angrier. “You honestly think money is the main consideration for who I hire to watch over AJ?” His eyes narrowed and his voice hardened. “I don’t count cost when it comes to family.”

That arrow hit its mark as well. It put the specter of Lanny between them, just as he’d no doubt intended. “I understand that. Because neither do I.” She wanted to shout at him I am not my father. But she needed him to feel sympathetic enough to give her the job. Her and Henry’s future could very well depend on it..